Rubidium chloride is an alkali metal halide with the chemical formula RbCl. This inorganic salt has different applications in the fields of electrochemistry and molecular biology. 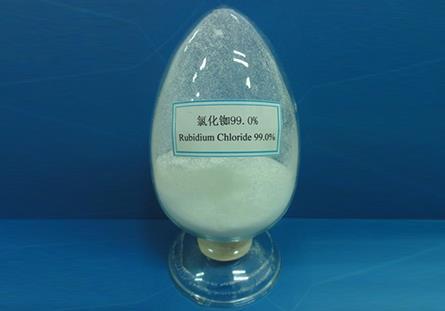 At high temperatures and pressures, rubidium chloride forms the structure of CsCl (NaCl and KCl form this structure at high pressures). The chloride ion surrounds the RB in the center of the cube at eight vertices of the cube system. This is the structure with the highest density of RbCl. Because a cube has eight vertices, the coordination number of the two ions is equal to 8. This is the highest possible coordination number of RbCl. Therefore, according to radius ratio rule, cations in this crystal form will reach the maximum surface radius, because the distance between cations and anions is the largest.

Rubidium chloride is hygroscopic, so it must be isolated from moisture in the atmosphere, such as the use of desiccants. RbCl is mainly used in laboratory. Therefore, many chemical reagent manufacturers can provide different amounts of rubidium chloride to meet various chemical and biochemical research needs.Usually, RbCl can be used as an electrolyte for water. RbCl transformation competent cells can be said to be the most abundant application of this compound. Cells were treated with low osmotic pressure (en: hypotonic) solution containing RbCl. Therefore, membrane proteins are removed to bind negatively charged DNA.